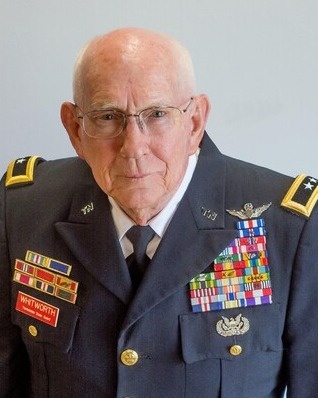 Colonel Whitworth was born August 27, 1938, in Davidson County, Tennessee at the Mud Tavern Community (now known as Donelson, Tennessee). After attending local schools, he graduated from Donelson High School and attended George Peabody College for Teachers. He later completed his undergraduate studies at Middle Tennessee State University where he received a Bachelor of Science degree (with Honors) in History and Earth Science. He also completed the Master of Science degree
(with Honors) in Vocational Counseling and Guidance at Troy State University, Troy, Alabama. In addition, he completed graduate work in Cartography at George Mason University, graduate work in Education at the University of Tennessee, and Doctoral Studies in Administration of Higher Education at East Tennessee State University.

In July of 1955, while in high school, Colonel Whitworth enlisted in the Tennessee National Guard (TN ARNGUS) and served in several positions. He entered active duty with the regular Army in April of 1964 and served until his retirement with over 30 years of service in 1988.  Colonel Whitworth commanded numerous Army Aviation units both stateside and in Vietnam. He had the distinction of commanding the first Attack Helicopter unit organized by the Army, the 155th Aviation Company (Attack Helicopter), then located at Fort Ord, California. During his command tenure, Whitworth was instrumental in developing the Army baseline for Night nap-of-the-earth attack helicopter flight training and implementing experimentation with the new
night navigation and laser target detection devices. The aerial TOW missile team he trained was instrumental in stopping communist tanks as they began the invasion of South Vietnam in April of 1972.

Colonel Whitworth’s military education includes the honor of being selected to represent the United States Army as an exchange student at the Air Force Command and Staff College. He also attended the Armor Officer Career Course, the inaugural Army Attack Helicopter Standardization Instructor Pilot and Gunnery Course, Fixed Wing Standardization Instructor  Pilot Course, Fixed and Rotary Wing Flight Training, Armor Officer Basic, Infantry Officer Candidate School (OCS), and the Armor Non-Commissioned Officer Academy. During his active service, Colonel Whitworth also attended numerous military and civilian professional development courses in terrain analysis, cartography, topographic mapping, human resource management and numerous combat aviation specialties. He held officer assignments and command from basic company level in the field to senior staff positions at the Department of Defense in Washington, D.C. His service placed him on duty in the Pacific and European Theaters as well as at major military posts on both the east and west coast of the United States and at such mid-western delights as Fort Sill, Oklahoma.

After retirement from active service, Colonel Whitworth went to work as the Assistant Director of the Job Skills Training Center at Walters State Community College and remained in that position for seven years. In March of 1996 he began serving as an employment and training consultant and policy technical advisor with the University of Tennessee (Social Work Office of Research and Public Service) on assignment to the Tennessee Department of Human Services. There he helped to implement and support program and fiscal operations of the Families First (welfare reform) program across the
state. In 2004 he began conducting contract/program reviews and audits for the TN Department of Human Services, Officer of the Inspector General, until his retirement in June of 2014 with 27 years of state service.

Visitation will be from 12:00 to 2:00 on Saturday, September 24, 2022 at Farrar Funeral Home in Jefferson City. A memorial service, with Masonic and Military Honors, will be held at 2:00 in the Farrar Funeral Home Chapel. Interment with full Military Honors will be held at Arlington  National Cemetery in Arlington, Virginia at an undetermined date.

To order memorial trees or send flowers to the family in memory of LTC William E. Whitworth, please visit our flower store.
Send a Sympathy Card