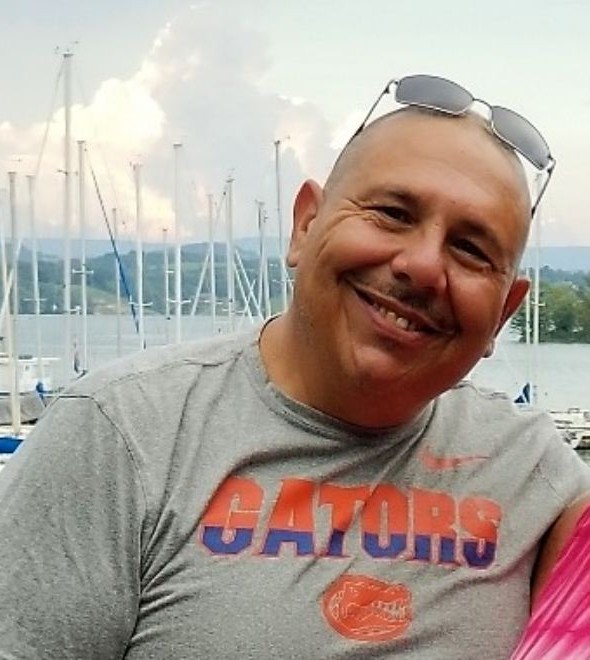 Angelos at the Point

LOUIS NELLO “LOU” ALAIMO, age 58 of Dandridge, TN, passed out of this life into the next on September 19, 2021. Dearly beloved husband, father, brother, and “PopPop,” Lou loved his family first and his Florida Gators second. The life of the party wherever he went, Lou had a playful spirit, a radiant smile, and a hilarious sense of humor. He loved meeting people and had a gift for making friends wherever he went. Lou was born the fifth of five children to Charles and Marion Alaimo in Wilkes-Barre, Pennsylvania and grew up in West Wyoming, PA with his four siblings. He moved with his family to Vero Beach, Florida as a teenager and attended the University of Florida where he played on the Florida Gators football team from 1981-1985 as a Defensive Lineman. He remained a devoted Gator fan all of his life and passed on his passion for the game to his children, grandchildren, nieces, and nephews. Lou was blessed to meet the love of his life, Deborah “Debbie” Galbraith, in 2005. The couple married in 2009 and, afterwards, moved to Tennessee. For the past six years, Lou was employed by the Stoughton Lease Company where he worked as an Operations Manager. He loved spending time outdoors boating and fishing with family and friends, loved cooking for his family, and loved spending time with his three grandchildren and visiting his extended family. Lou was preceded in death by his parents and by his beloved brother-in-law Richard Hoch; he is survived by his wife, Debbie Alaimo; by his three daughters and their spouses, Stephanie Galbraith and Kirk Nicodemus, Brooke Galbraith and Joshua Hollingsworth, and Jayce Galbraith and Austin Potts; by his grandchildren, Harper, Jeremiah, Isiah, and baby Nella, named for her “PopPop,” on the way; by his four siblings and their spouses, Gregory Alaimo, Rose Ann Brant and William Brant, Charlene Hoch, and Angela Alaimo O’Donnell and Brennan O’Donnell. He also left behind numerous adoring nephews and nieces, including Charles and Elise O’Donnell, Patrick and Theresa O’Donnell, William and Laura O’Donnell; Richard and Melissa Hoch and Michal and Andrew Palmacci; and Vito Brant. Lou was a loving great-uncle, as well, to Ellie and Cora O’Donnell, Brady Palmacci, and Elena Rey Hoch. The heart of our family, Lou was dearly loved and will be terribly missed by all. A celebration of his wonderful life will take place on Friday, September 24, 2021, at 3:00 PM at Angelos at the Point, 122 Boatdock Drive, Dandridge, TN 37725. In lieu of flowers, donations may be made to the Lou Alaimo College Fund for the education of his grandchildren and sent to Deborah Alaimo, 108 Danielle Drive, Dandridge, TN 37725.

To order memorial trees or send flowers to the family in memory of Louis N Alaimo, please visit our flower store.
Send a Sympathy Card

Angelos at the Point