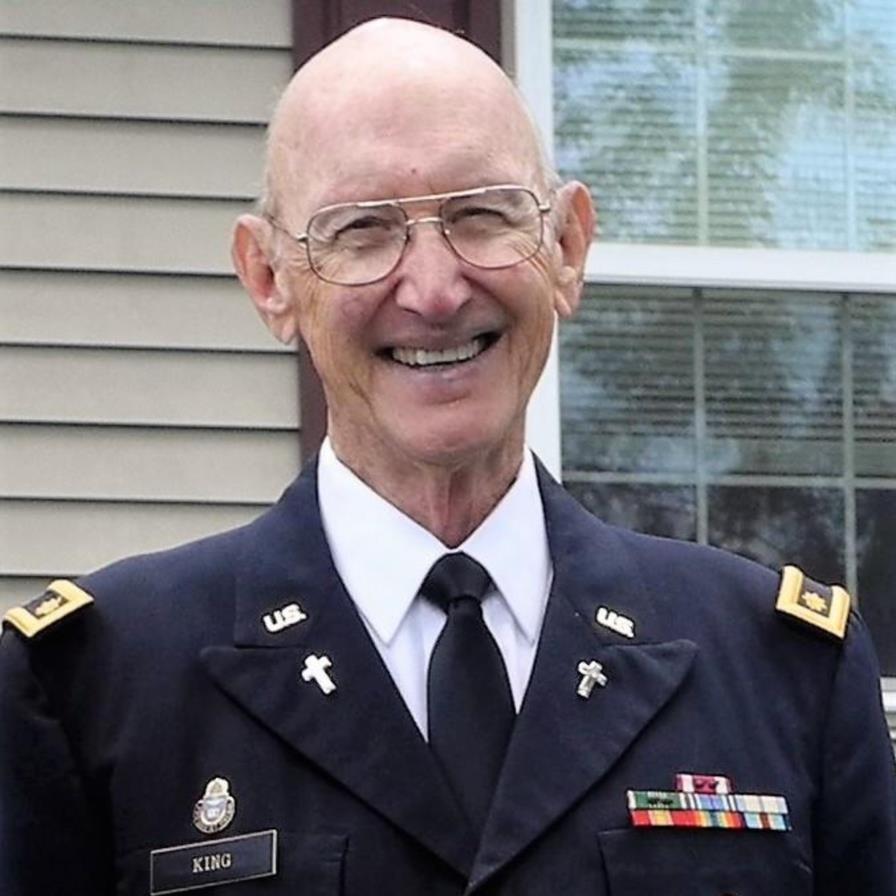 Ira Eugene King, 82, of Dandridge, Tennessee passed away late Tuesday, January 19 at his home following a long battle with heart disease. “Gene” to his friends and family, was a U.S. Army Chaplain (Major), retired 1994, and a 55 year ordained minister in the Church of the Nazarene. He served numerous Nazarene churches in Tennessee, Missouri, Michigan, Florida and Virginia. As a 20-year chaplain and military officer, he served stateside assignments in New Jersey, Virginia, Georgia, Texas and Pennsylvania, overseas posts in South Korea, and West Germany and a short-term assignment in Honduras. King was born April 26, 1938 in Homestead, Florida and moved a short time later to Savannah, Georgia where he lived through high school graduation. He entered Trevecca Nazarene College, Nashville, TN in 1958 to prepare for pastoral ministry and earned a B.A. in religion, then later went on to complete a Master of Divinity at Nazarene Theological Seminary, Kansas City, MO. He also completed coursework towards a Doctor of Ministry at Drew University, NJ. King is preceded in death by a sister Sybil (d,1935) father, Ira H. (1992), mother, Leatha Mae (2006) and sister, Sarah (2018). While in college, King met his life partner, Peggy and they married in June,1962. They have 3 children: Randall, 57, Greer, SC, Tracey (Rutter),52, Creedmoor, NC and Lori (Teuton), 49, Chattanooga, TN. Grandchildren are Elizabeth King (30), Wade Rutter (25), Kandace Rutter (22), Cody Teuton (22), Carson King (21), Ryan Teuton (16), and Kailie Teuton (14). In retirement, King taught adjunct classes at Walters State Community College and Carson-Newman University, and volunteered as a chaplain to the Jefferson Park Nursing Home. Gene and Peggy enjoyed the fellowship of First Baptist Church, Dandridge for more than 15 years and they invite you to join the family there in a celebration of his life. Services will be 3:30 PM on Saturday, January 23, 2021 at First Baptist Church of Dandridge with Dr. Justin Terrell officiating. Gene will Lie in State from 2:30 to 3:30 at the church before the service. The church is planning a live video stream from the church website for those unable to attend. There will be a reception following the service at First Baptist Church for the family and friends. Due to COVID19, the family has asked that guests follow church protocol during times of personal greetings. The private interment will be on February 3, 2021 at East Tennessee State Veterans Cemetery with military honors. In lieu of flowers, the family asks that donations be made in his name to the American Heart Association.
To order memorial trees or send flowers to the family in memory of Ira Eugene King, please visit our flower store.
Send a Sympathy Card